Learn more about our revised in-office safety policies in response to the COVID-19 outbreak.

What Is Rectal Bleeding? 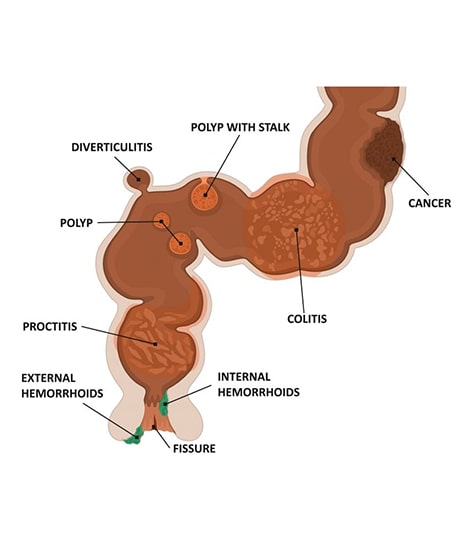 “
”
★ ★ ★ ★ ★The entire staff were welcoming and made the visit quick and seamless. The office is clean and the staff even make a point in offering coffee or water while you wait. The doctor was very friendly and to the point. Highly recommend choosing this office.

What Are the Symptoms of Rectal Bleeding?

Proctitis is a medical condition that occurs when the lining of your rectum and rectal lining becomes inflamed. This can be a painful condition. The symptom of proctitis can include anus bleeding.

Causes of proctitis include:

Pooping blood or finding bright red blood in the stool is never normal. During your examination, our rectal bleeding doctors have several options to find the source of the problem. They may:

When Should You Worry About Rectal Bleeding?

Bleeding from the rectal area should always be evaluated with a thorough consultation and examination by a rectal bleeding specialist in NYC for an accurate diagnosis and blood in stool treatment plan as it may be a symptom or sign of a serious illness or condition.

When should you see a doctor for rectal bleeding? You should seek immediate emergency help if you have significant bleeding from rectum and any of the following symptoms:

Can Medications Cause Bleeding From Anus?

GI bleeding might be linked to the use of oral anticoagulants. Hemorrhoidal bleeding can be also associated with medications that lead to constipation. Other triggers and drugs that cause rectal bleeding could be advancing age, the use of multiple medications, drug-drug interactions, and health-related disorders.

Are There Any Home Remedies for Rectal Bleeding?

Bleeding rectum treatment depends on the root cause of the problem. There are several natural ways that can help you address bleeding from the anus.

These natural remedies are:

Even though the aforementioned recommendations are considered helpful, you should talk to your healthcare provider before starting any treatment.

Can Stress Cause Bleeding Out of Rectum?

Stress does not typically lead to ulcerative colitis. However, chronic stress can have a negative impact on your immune system and trigger chronic inflammation. It will increase ulceration and cause bleeding. Undoubtedly, it is not possible to eliminate all stress but you can learn ways to handle your emotions and stress. Try to avoid the consumption of caffeine and alcohol, which can stimulate intestinal contractions and worsen diarrhea. Caffeine and alcohol might also worsen stress and anxiety.

Important Reminder: This information is only intended to provide guidance, not definitive medical advice. Please consult a doctor about your specific condition. Only trained, experienced physicians like our doctors can determine an accurate diagnosis and proper rectal bleeding treatment.

Our best in class NYC rectal bleeding doctors provide highly personalized and comprehensive care. They have earned some of the most respected reputations in NYC. For more information about the options of rectal bleeding treatment in Upper East Side or Midtown NYC or to schedule an appointment with one of our GI doctors, please contact our offices.

Our site is the source of information about the gastroenterology related conditions and procedures. This information is intended for patients looking to learn about our gastroenterology practice in New York (Midtown and Upper East Side Gastroenterology) and make an appointment to see one of our physicians. This information is only intended to provide guidance, not definitive medical advice. Please consult a doctor or GI specialist about your specific condition. Only a trained physician can determine an accurate diagnosis and proper treatment. Terms and conditions are subject to change.

ManhattanGastroenterology.com has a Shopper Approved rating of 5.0/5 based on 792 ratings and reviews